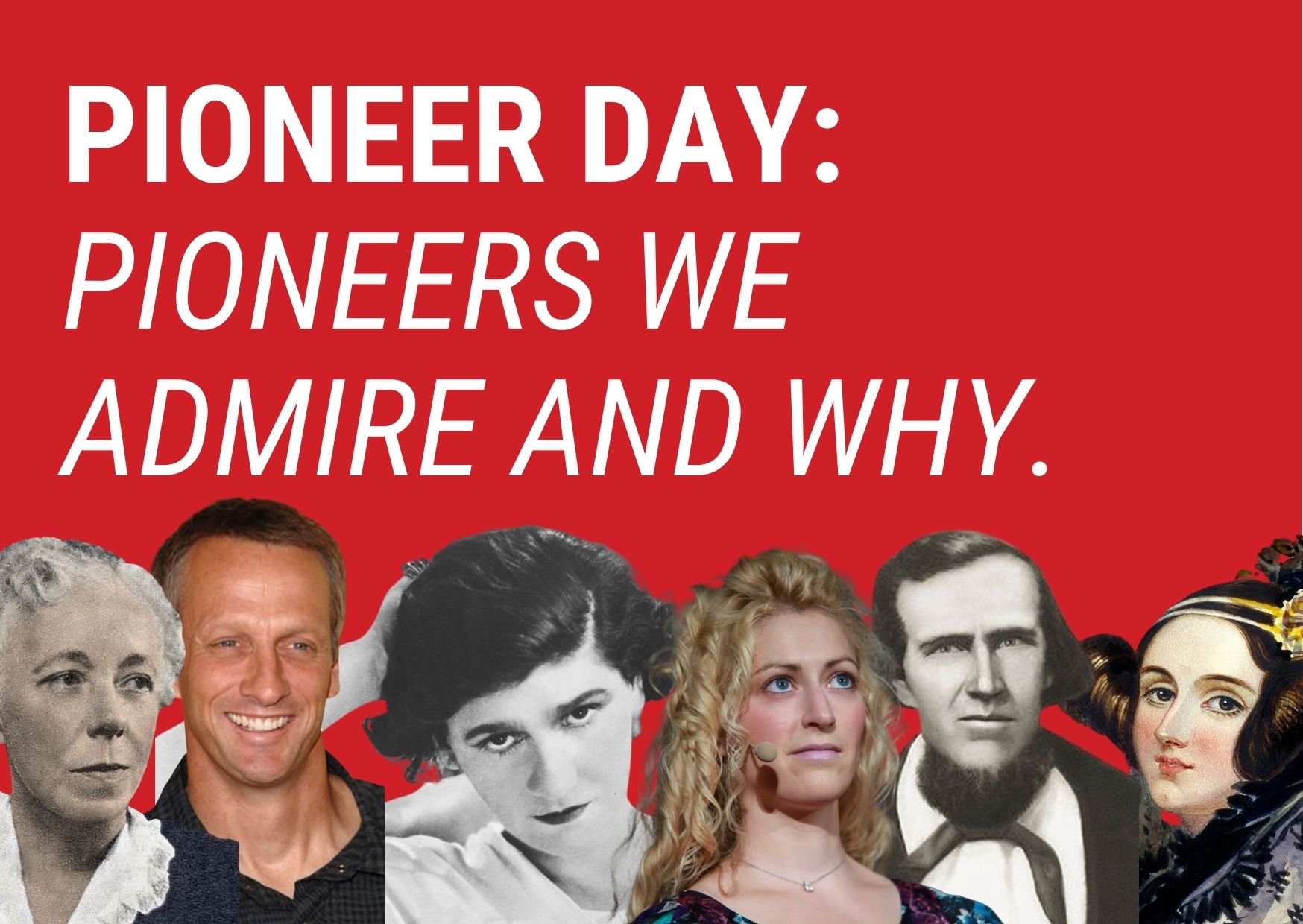 Pioneer Day is a state holiday in Utah. It is celebrated on July 24th each year to commemorate the entry of Brigham Young and the first group of Mormon pioneers into Utah’s Salt Lake Valley in 1847. This day celebrates the bravery of the original settlers and their strength of character and physical endurance.

At Really Epic Dog Group we choose to share our company holidays for example, the US office celebrates Mandela day along with South Africa and Pioneer Day is no different.

For us Pioneer Day is special because it epitomises some our company values perfectly. Innovation, Tenacity, Community and Sacrifice in particular. We asked our global staff to share with us a pioneer from any industry or part of the world tell us why they admire them.

“I’m not sure if Jane Mcgonigal fits a definition of a Pioneer. But she was the first, if not the first then the most impactful person I’d seen advocating the benefits of video games. Her TED talks are not only entertaining, but very informative. She mentions how games may have been a reason for some ancient cultures survival. In more current times references how a video game not only helped but sped up AIDS research. She also created a simple phone game that helps encourage polite social encounters as well as guiding the user in fostering friendships and many other positive behaviors.” – Hayden Anderson, AP/AR Accountant, Really Epic Dog Group.

“One of the first Mormon Pioneers to arrive in the Salt Lake Valley, was Jacob Hamblin. He first settled in Tooele and later was asked to settle the St George area. He lived and worked among the local native american populations. He was a great example of bridging cultural divides and genuine love and empathy.” – Trevor Suelzle, CFO, Really Epic Dog.

“Elsie Nielsen and her husband Jens, a wealthy farmer from Denmark, pulled a handcart across hundreds of miles in the dead of winter towards the Salt lake Valley from Illinois. Their lack of food and the deathly cold took the lives of their son of 6 and a little girl of 9 they were taking care of. Further into their journey Jens, very muscular man who was 6″4, got frostbite on both his feet and he was too sick and frail to walk. Elise Nielsen who was only 4″9 lay her husband on the handcart and single handedly pulled him and their supplies into the Salt Lake Valley. Had she not committed to this impossible task for a woman so small in the most treacherous conditions they both would have died out on the plains. There was no else to help and she had to do it all alone. We are not exactly sure how far she pulled that hand cart but it was more than 5 miles before she could see the Salt Lake valley. They both survived, Jens had parts of both feet amputated but went on to be a prominent leader and Bishop of the church in the Valley. Without the diminutive Elsie he would not have made it and our neighbor, Jill Nielsen and her 8 siblings would not have been born to tell of their Legacy.” Colin Wiflord, CEO, Wilford Scholes.

“Karen Horney is an under discussed but incredibly important pioneer in psychology. She is known for her contributions to personality theory and feminist psychiatry. She was a rebel, and rejected theories of psychosexual development put forth by Sigmund Freud, even though she knew this would result in her expulsion from the NY Psychoanalytic Institute. She went on to establish the American Journal of Psychoanalysis, and used her own experiences with depression to inform her research on how gender power imbalances impact mental health and the development of psychological theories. She advanced the discussion of gender, power, and privilege, and paved the way for more accurate and equitable research.” -Haley Schiek, Sales & Marketing, Wilford Scholes.

“Ada Lovelace envisaged the use of Babbage’s calculating engine for more than just the addition of numbers. She’s widely credited as writing the first algorithm for it and inspiring the way early computers were developed. Ada Lovelace, although undoubtedly from a privileged background, still had to overcome the stereotypes in place at the time to be taken seriously. She’s a great role model for my daughters and an inspiration to everyone to keep pushing the boundaries of new technology.” – Howard Emmanuel, Customer Success Manager, Laduma.

“Gloria Steinem was one of the the first leaders and spokeswomen for the feminist movement in the 60s and 70s. She inspires me with her intense drive, intelligence, and overall powerful woman energy.” – Sophie Williams, Office Manager, Really Epic Dog Group.

“Coco Chanel was a fashion designer and business woman. Among her pioneering productions were many fashion choices we now take for granted: the little black dress, suits for women, cashmere cardigans, slacks. She also helped popularise short hair. Chanel allowed women to be fashionable while at the same time wearing comfortable clothes appropriate to the setting. She also had a great quote me and my cousin grew up hearing which was ‘In order to be irreplaceable one must always be different.’ – Zoe Hewitson, Marketing Assistant, Really Epic Dog Group.

“Russell Kirsch lead the research into digital imaging (Invented the “pixel”, storage, capture of images) The fact that we all have camera phones now and can capture images and moments either stills or video. Something that we all probably take for granted but is such a powerful tool and has an incredible impact on the memories we make and how we remember those we love.” – Jonas Helgren, CTO Really Epic Dog Group.

“Tony Hawk was a true pioneer of modern day vert skateboarding. A boy with a dream that morphed it into a career and business. Not only did he revolutionize the sport and complete the first ever documented 900 but he has built a brand that is one of the biggest in skateboarding and also in the action sports world. One of the most successful skaters and entrepreneurs from the action sports world. I was watching the X games last week. It was the best trick vert competition. Tony was a last min entry at age 53. The magic that happened in this competition was amazing. There is a new up an coming young skater that is only 12 yrs old, GUI Khury. In the competition Gui landed the first ever 1080 in tue sport in a competition against the legend and pioneer, Tony Hawk and walked away with the gold medal. Youngest in history to win a gold. The first person to congratulate him was Tony Hawk. This was such a powerful moment to me. A young boy with a dream competing against his idol and the pioneer of the sport, and winning. Does Guy have this moment in hi life without the road paved by Tony? Not sure. Time will only tell what Gui will do in the future.” Matt Brown, Head of Pre-Academy, 7 Elite Academy.

“Sir Frederick Grant Banting discovered the life-saving properties for insulin in the 1920s. He found a way to isolate insulin and use it to control blood sugar levels in diabetic patients. He saved millions of lives (including that of my son) but eventually sold the patent for just one dollar. He was solely interested in saving lives. Today, companies around the world make billions in profit from this patent.” – James Shaw, Press Officer, 7 Elite Academy.

“Steve Heighway was not only a Liverpool F.C legend in the 70’s but was LFC’s head youth coach/academy director from the late 80’s to late 00’s who developed not only LFC’s youth system with talents like McManaman, Owen, Gerrard, Carragher, Fowler and many more LFC players but he also shaped the academy system in the U.K. Steve was not only a pioneer in making LFC be the first club in the U.K to have a full accredited Academy in 1998 but his level of detail in his coaching especially in the art of mastering ball technique is something that he will always be head and shoulders above the rest in. At the age of 73 he is back coaching at the LFC academy and is still curling balls into top corners, landing 40 yard pinpoint passes, beating players with demo attacking skills all with precise technique with information that blows any inspiring young player or coach’s mind. I came across a match day programme last year from 1995 with an article from Steve about his coaching methods and what youth players need. 26 years later on we are seeing professional academies starting to use the same approach now. He was 20-30 years ahead of everyone in youth football system.” – Anthony Godfrey, President, 7 Elite Academy.

“Nasir Ahmed is responsible for keeping us all connected today. Most people don’t know his name but back in the 70’s he and his team developed the Discrete Cosine Transform (DCT), that probably doesn’t mean much to anyone but it is the technology that helped make image sharing and video-conferencing possible. Without Nasir we wouldn’t have things like WhatsApp and FaceTime, things that a lot of us take for granted. I am very grateful for his work 50 years ago which means I can see my family today, even though they are 5000 miles away.” Lauren Reynolds, Head of Marketing, The Homestead.